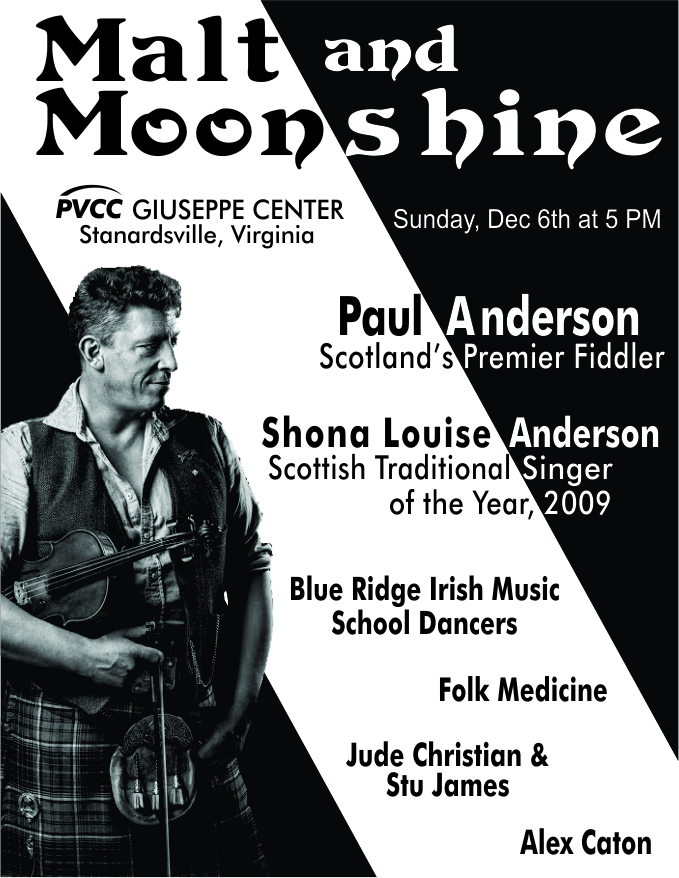 The Art Guild of Greene is presenting a free “Malt & Moonshine” concert on Sunday December 6th at 5:00 pm in PVCC’s Guiseppe Center, 222 Main St. Stanardsville above the Greene County Library. The musical event will feature world-renowned Scottish fiddler, Paul Anderson and his wife Shona who was Scotland’s Traditional Singer of the Year in 2009.

Paul Anderson is widely regarded as the finest fiddler in Scotland. He has performed for the Queen of England and has composed hundreds of tunes, including a symphony that pays tribute to the farming history of his ancestral home in the Scottish highlands. For more information, see his website: paulandersonscottishfiddler.com

The Andersons will begin the concert by playing and singing a set of traditional Scottish music, accompanied by dancers from the Blue Ridge Irish Music School. They will be joined on stage by local musicians for a conversation about the connections between Scottish, Irish and Appalachian music. Accompanied by Paul and Shona, the concert program will include Jude Christian and Stu James singing Irish ballads and “Folk Medicine” singing traditional Americana music. Alex Caton, local fiddler and teacher of Irish and Appalachian music, will also perform and discuss Virginia’s musical heritage.