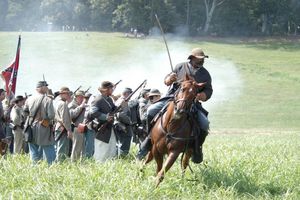 The Battle of Stanardsville returns to Greene County with a re-enactment scheduled on Saturday, April 23, at 2:00 p.m., in Stanardsville, in the area around the Courthouse and Blakey Ave.  The 1864 skirmish between Union and Confederate troops always draws wide-spread attention because it involved the cavalry forces of two notorious Civil War generals, George Custer and  J.E.B. Stuart.  This year’s re-enactment will be considerably scaled down, with 50-60 soldiers participating, but no cavalry units.

The highlight of the two-day event will occur at 1:00 p.m. on Sunday with a 155th anniversary ceremony re-creating the muster of the 7th Va. Company F, which actually took place on April 27, 1861, on the Courthouse steps.  The weekend’s festivities include period encampments and military demonstrations on both Saturday, April 23rd, from 9:00 a.m. to 5:00 p.m., and Sunday from 9:00 a.m. to 3:00 p.m.  There will also be a church service on Sunday at 10:00 a.m. and a Ladies Social at 12:00 p.m., plus children’s games and a cooking demonstration Saturday at 12:00 p.m.  Admission is free.  For further information, contact Fred Allen at 434-985-3314 or 7thvacapt@gmail.com.  Click here for a listing of weekend activities:  battle of stanardsville 2016